The Fullerton Hotel is an iconic luxury hotel in downtown Singapore where Raffles Place meats Boat Quay. It was previously the General Post Office, and today is at the hub of all things social, savvy and stylish. By no means a small hotel, we look at the Fullerton as a bastion of both its parent company, Sino Land, and of this thriving city-state of Singapore. In this case study, we'll Chinafy a portion of their website and evaluate the findings.

Secondly, a quick note on transparency:

Chinafy does not currently work with The Fullerton Hotel. We have taken their landing page, applied one pass of our compatibility intelligence, and subsequently performed a series of performance upgrades. This case study is not necessarily endorsed by The Fullerton Hotel Singapore, or by its parent company, Sino Land.

This study will be broken down into two parts: i) General Overview, and ii) Technical Overview catering to two different audiences.

For this case study, we take their main landing page: www.fullertonhotels.com and Chinafy it. We scan the page, evaluating each component, the method of coding, as well as the infrastructure. After reviewing our findings we take a series of steps that optimise the site across all facets of performance.

We're big fans of both Singapore, and the Fullerton Hotel. The country has undergone a tremendous transformation the last 15-20 years establishing itself as a regional powerhouse. While a heritage building indeed, it's technology too seems to be stuck in the past. The Fullerton site simply doesn't deliver - literally, and we'll dive into the detail. 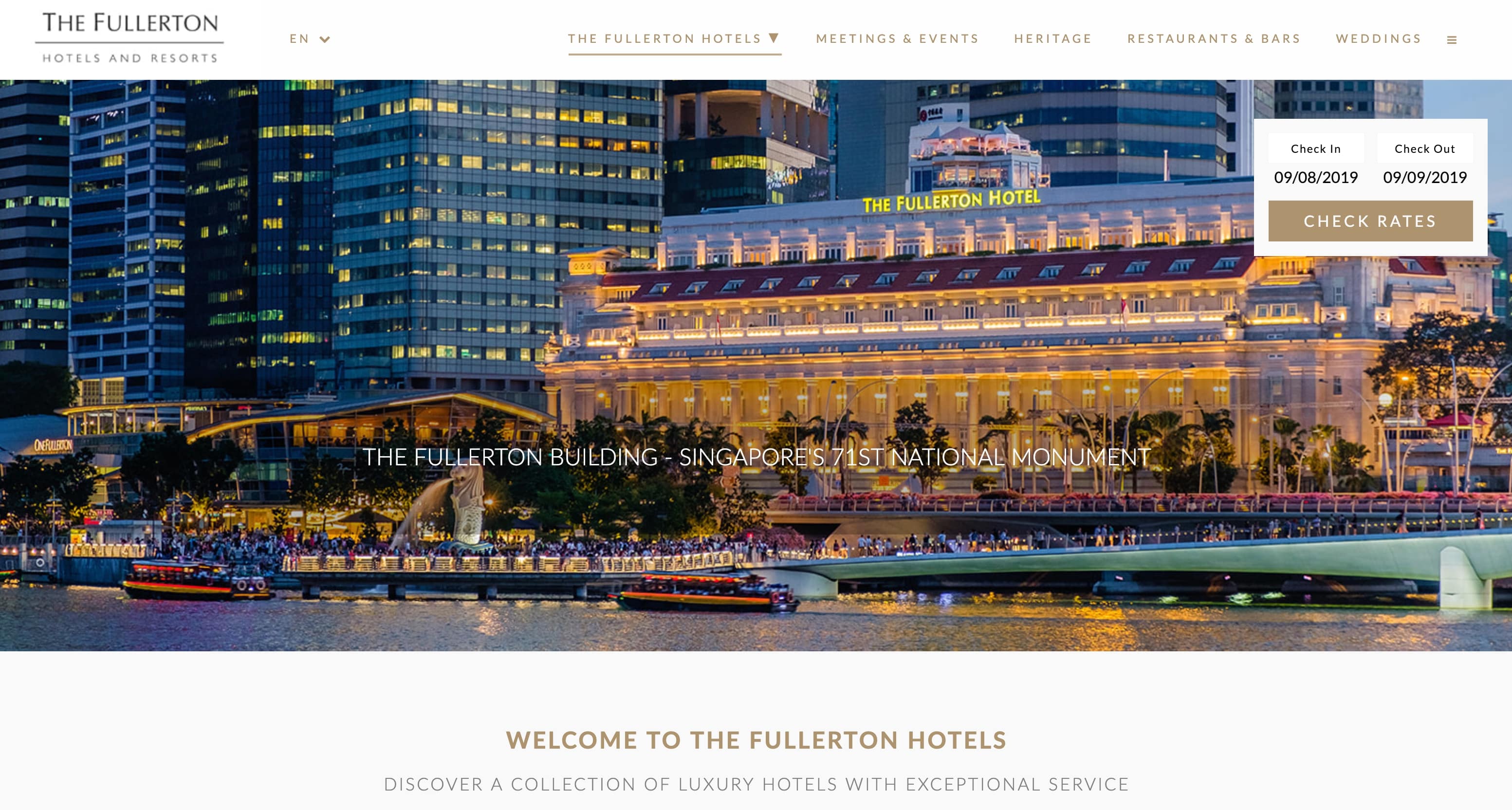 The most significant problem for this site is potentially an over-reliance on Google. The fonts, the image carousel (the feature photo rotates from one to the next), and videos are all on loaded from blocked domains. While it's normal for hotels, and global hotel chains to develop their Youtube channels, The Fullerton Hotel has dozens of Youtube videos displayed directly on their page offering a broad, rich, and deep assortment of content for viewers of all types. The only problem is that Youtube doesn't work in China. When visitors (rather 'if' visitors) from China were to head down the bottom of the page, they'd be met with a series of empty boxes. We say 'if' because it's unlikely they're even getting that far. 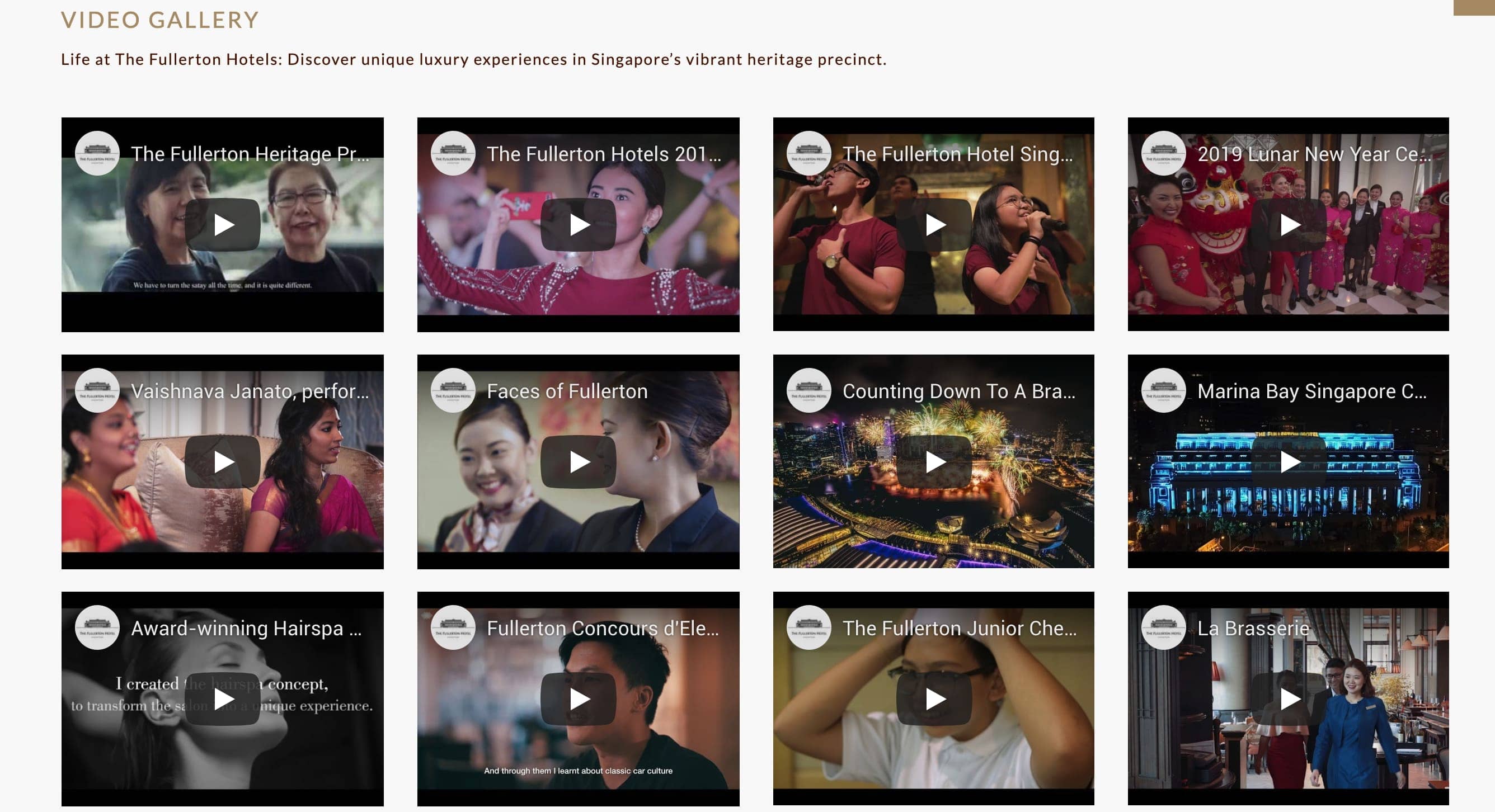 A single pass of Chinafy addresses about 70-80% of the incompatibilities on the page having a substantial impact on both the visual experience, as well as the loading time. We see about a marked 495% improvement in page loading time, not to mention, the Youtube videos have been converted to streaming video (mp4s).

When we said 'if' above - we were referring to the ability for a Chinese visitor to scroll down the page. The reality is that the page is loading so unreliably, it's quite likely that it simply doesn't load at all.

As mentioned above, the image carousel, fonts, and a number of other features are loaded from Google which (may) prohibit other items from successfully appearing. In this one example, we see 91 of 298 potential resources loading or only about 30% of the intended components. It's built on Weebly which appears to be an odd decision from our perspective, but the W Hotel (examined here) is on Wordpress which doesn't fare much better.

The above table is from one instance, or comparison. We took 120 test below, and plotted the Average Time to Load All Resources. While we're looking at the average, keep in mind that the Original site is only loading 91 resources. If it were to actually load 298 resources (as the Chinafy site does) we expect the full loading time to be a whopping 60+ seconds on average . 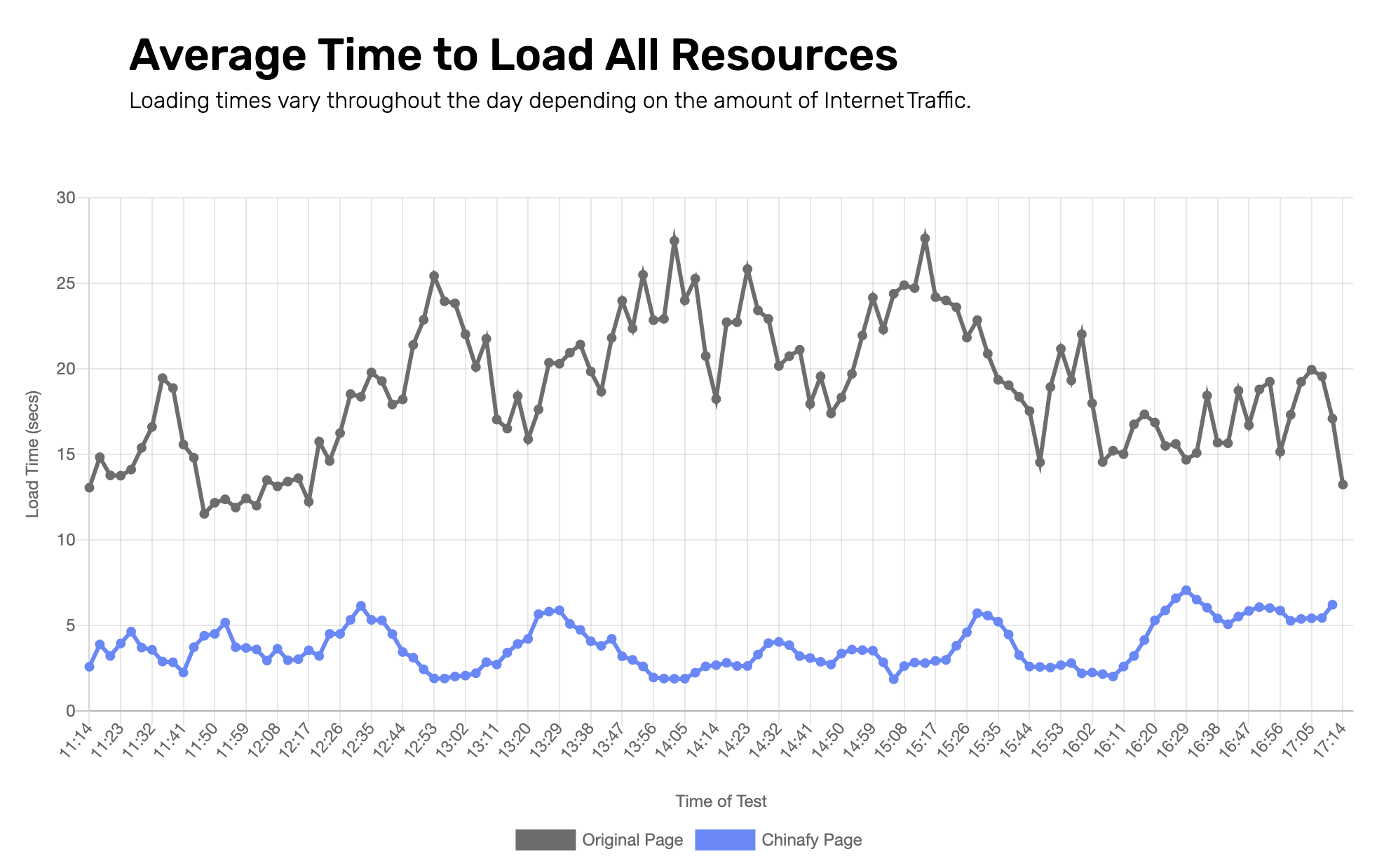 Within the Travel domain, faster sites have a clear, measurable, and immediate impacts on revenue. When visitors are looking at multiple sites comparing the best hotel, the best price, and the best perks - if the site doesn't load within seconds, the Fullerton has lost that direct booking, and potential any booking altogether (i.e. via an intermediary).

Based on some general industry statistics, we see an immediate impact on revenue, to the tune of 4.3x more direct bookings. That's a huge number, and one not often seen with page-speed, but when you consider that the site is so slow in the first place, the denominator (i.e. current # of bookings) is rather small.

Learn how these stats are generated

The above analytics take into account a somewhat 'normal' page, but we'd estimate the conversions, or revenue impact being closer to 10x their current revenue. When a site doesn't load, the baseline is basically zero. What does that mean in dollar terms per year?

That's over a million dollars a year on commissions/fees paid. Granted - not all 20% of guests would be booking direct, (there are probably some industry stats we should acquaint ourselves with here) and this wouldn't monetize overnight to such a large extent, but there would indeed be an immediately be an up-tick in conversions based on their current baseline traffic where the above math represents the upper bounds. Considering only a single-digit fraction of Chinese have passports, one can understand the importance of remedying this.

We'll leave you with a histogram highlighting the frequency of page load times: 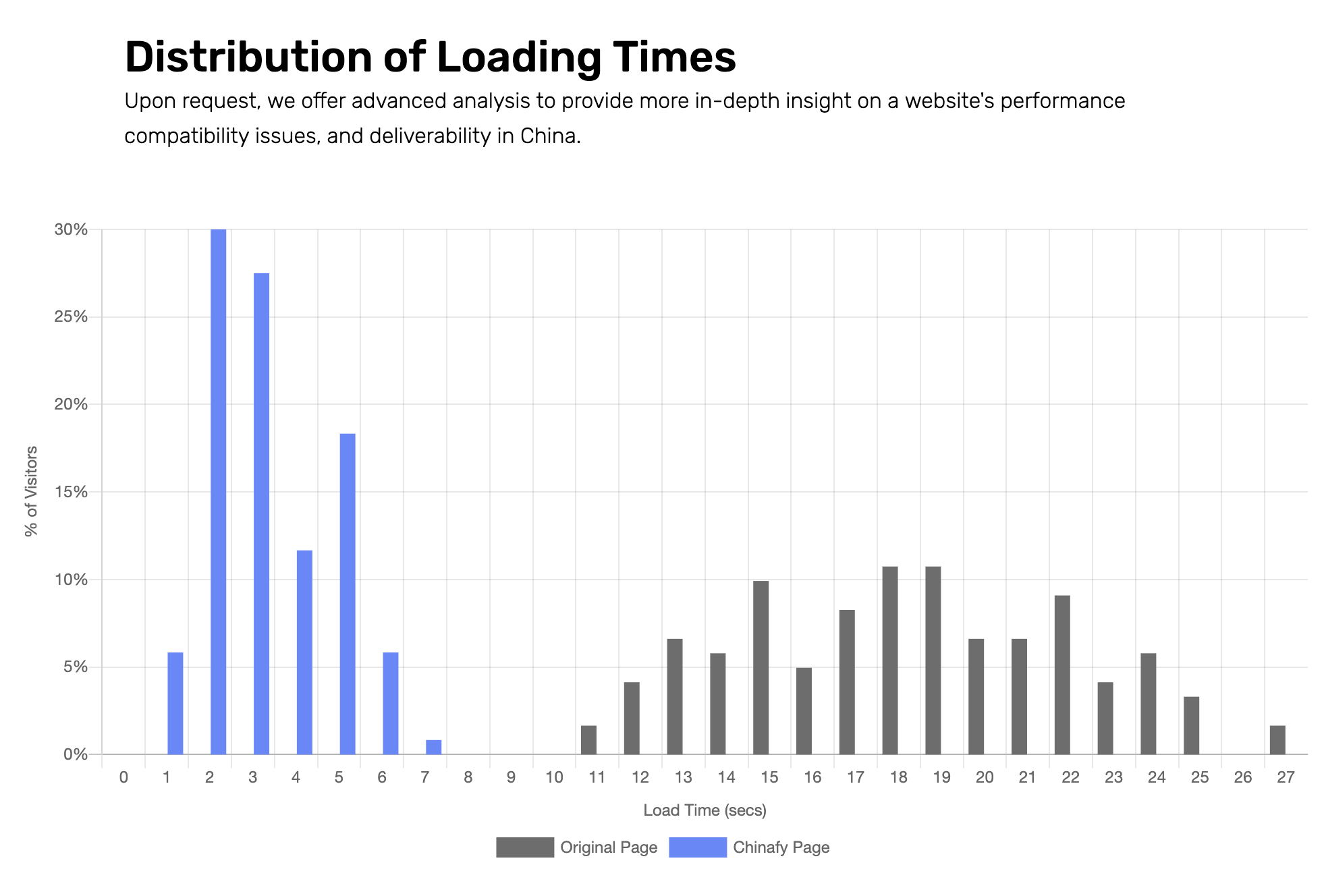 The Fullerton Hotel suffers from a number of problems, the most obvious being an over-reliance on Google with a number of ajax.googleapis.com requests and a number of 3rd party snippets of JS which load from multiple, slow domains. The two graphs below illustrate the sheer difference in performance between the Original Site and the Chinafied Site. Note again, that only around 100 of 300 resources are loaded at any given time. In the graph below, you will notice that the Bucketed 100-end time has a value on the Chinafy side indicating that we continue to load resources where as the Original site has an N/A indicating that no further resources were loaded.

The Fullerton Hotel is not atypical - most foreign sites load in such a manner in China. The important thing is there's an opportunity to fix this immediately a positive impact on revenue. A site that doesn't load, is a site that doesn't exist. We modified, and optimised about 150 resources in some shape or form to ensure this site delivered predictably and reliably.

Chinafy is incredibly fast at scanning, and optimising sites for China. If you're looking to increase revenue, improve both predictability and reliability, reach out to us. While our technology is largely automated, we do like to see if there are any additional manual optimisations that may be appropriate. We typically can have you up and running within a day.