Chinafy and Alibaba Cloud deliver solutions to global companies that, in an increasingly competitive digital field, has become critically tied to metrics across user experience, SEO, and more importantly, ultimate revenue as it relates to China.

In this article, we’ll answer -

What is Full Website Acceleration in the context of China?

Why companies use both Chinafy and Alibaba Cloud

There are often two key inaccurate assumptions that are generally made when it comes to cross-border web performance.

That speeds, connectivity, content management are the same across countries, markets and borders. They aren’t.

Web Performance is synonymous with speed. It isn’t.

This limited view often means that the most popular web performance practices and or resource libraries fail when met with emerging markets or specific countries that have a different set of rules and technologies, that may be perceptibly similar to those elsewhere in functionality, but entirely different in practice.

This is especially true in China.

Optimising websites is an increasingly complex practice as websites become more dynamic, are enhanced with a growing range of third-party plugins and pixels, and as user expectations also rise in response to advancements in the space.

Content Delivery Networks (CDNs) like Alibaba Cloud, AWS, Google Cloud and more, have thrived in response to the increasing demands of websites by increasing the speed at which data is transferred and improving how content is delivered.

However, when it comes to China - which has a different set of rules, technologies, and variables when it comes to speed - these CDNs & related solutions are only able to get you part way to a fully performative experience in China.

Let's not forget to highlight that in order to use some of these services, it's assumed that you’ll have already gone through the arduous process of obtaining the requisite licenses and or built a new website altogether with multiple headcount to only find you cannot possibly replicate the global experience.

hosting on Alibaba’s ECS on or offshore and

bolting on dynamic query acceleration via their Global Accelerator

you can still expect a few barriers when it comes to web performance in China.

These friction points include -

Compatibility issues such as inaccessible resource domains on the FE, application layer, that power maps, videos, analytics and more

An evolving landscape of bifurcating technologies

This is where Alibaba’s partnership with Chinafy comes in.

Chinafy is a virtually one-touch solution that dynamically re-engineers the front-end code and restructures the China-specific infrastructure for a full site acceleration solution. 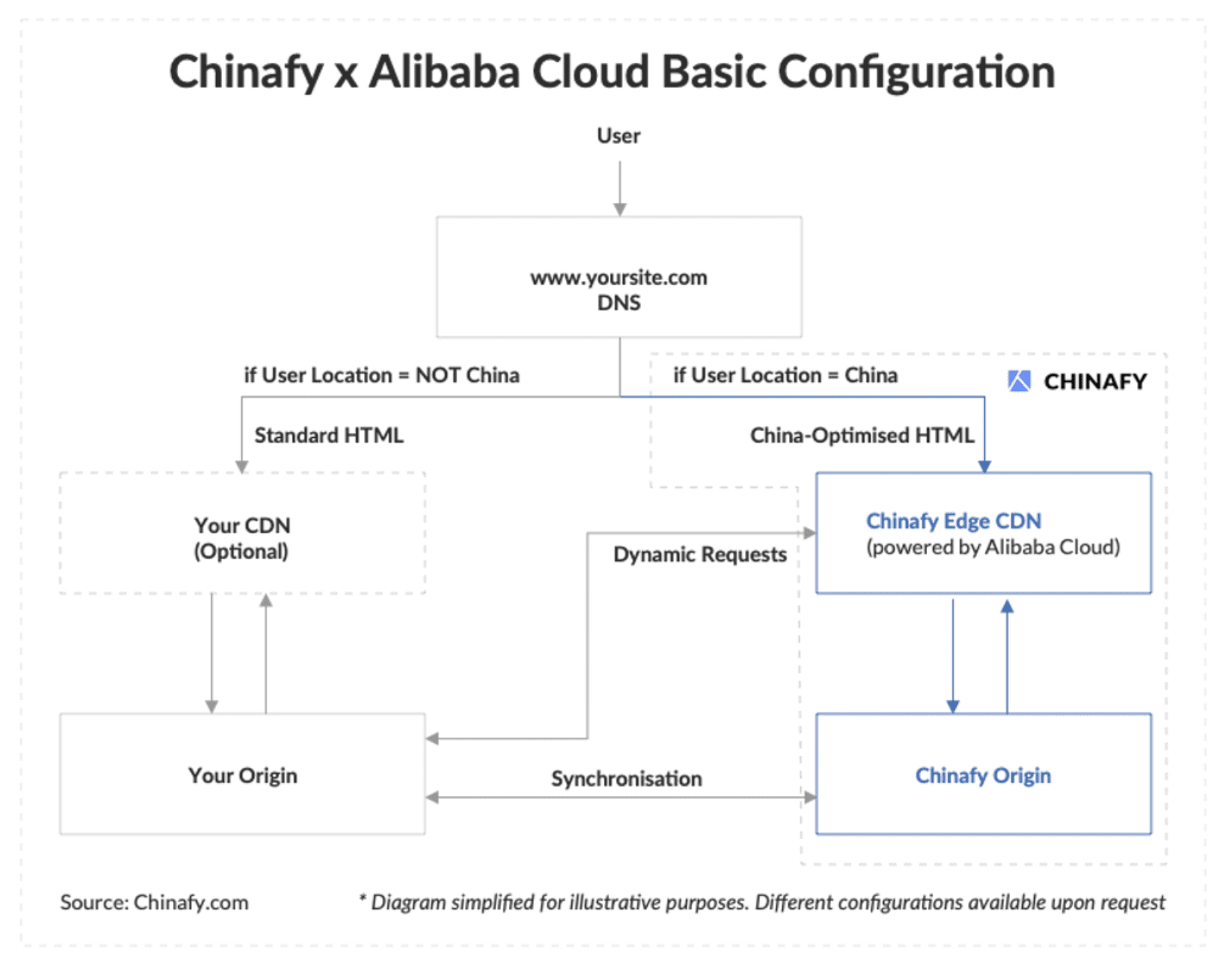 Companies that previously had to rebuild their site from scratch, re-architect both their FE code and BE set-up, obtain the requisite licenses to then only achieve partial web performance companies can now access both a best-of-breed cross-border CDN stack and China Web Compatibility specific solution with minimal technical implementation.

Interested in how you can use Chinafy x Alibaba Cloud to power your website or web applications? Fill out the Chinafy Get Started form to learn more.